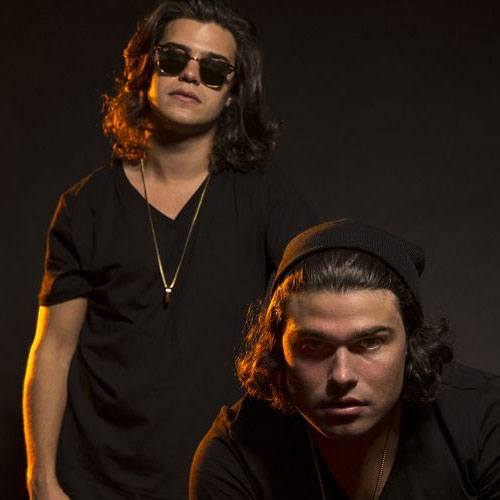 DVBBS biggest achievement so far is their smashing single ‘TSUNAMI’: Released on Beatport in August going directly to #1 position in the Beatport main chart; while dominating #1 on the main Itunes Charts in countries all over the world.

The Andre brothers are natives of Orangeville, Ontario. They have also spent part of their childhoods in the Netherlands and Greece.They are currently based in Los Angeles, California,and are signed with Josh Herman at STRVCTVRE Artist Management.

DVBBS spent two months recording their debut, Initio, released in March 2012. The EP features influences from a variety of genres, including house, electronic, dubstep and reggae.

Their greatest hit came with "Tsunami". At first the authorship of the track was not revealed. The single had been popular at festivals for months prior to its official public release. It had been promoted by Dutch DJ Sander van Doorn, although he denied being the producer.Also the tracks shows some similarities to music made by Blasterjaxx, but there is nothing known about that either. The song was confirmed by Pete Tong to be the work of DVBBS and Borgeous when Tong played the song on his show on BBC Radio 1 on August 16, 2013.It was officially released on Sander Van Doorn's label Doorn Records on August 19, 2013.The song charted worldwide on iTunes, reaching #1 in the Netherlands, also charted in Belgium, Austria, Denmark, Sweden, Canada and Germany.It also reached #1 on the Beatport 100.

One of the biggest tracks of 2013, 'Tsunami' first appeared  twelve months ago after being hammered in every Sander Van Doorn set. The speculation stated that it was the trance/come EDM goliath who had produced the record - that was until Pete Tong premiered it on his BBC Radio One show, revealing the fact that the Canadian duo DVBBS & Borgeous were behind the thumping dance floor smash. Sander then released it on his label, Doorn in August of 2013.

The rest is history. 'Tsunami' clocked up 30 million collective Youtube plays and hit No.1 across the Beatport charts. A bonafide EDM smash hit!

Now it is back on Ministry of Sound and strapped with a new vocal from UK rapper Tinie Tempah, which will hit the streets in 2014. A quick read of the SoundCloud comments will tell you that the vocal has polarised opinion, but there can be no doubting the support for the new version from the likes of Diplo, Zane Lowe, and Pete Tong.

With Tempah's history of making EDM hits with the likes of Swedish House Mafia and Calvin Harris you certainly wouldn't bet against this one being rewound, one more time!

These Canadian brothers are a dance-duo who combine the genres of electro, house, reggae, rap, and pop in an all-encompassing hybrid that is not only perfect for clubs but it also reaches the top of the charts. Uniquely, DVBBS’ musical efforts are performed live as Alex sings and Chris drums, however they also perform in an engaging and energetic DJ set.

DVBBS are Toronto-based multi-instrumentalists with an insatiable appetite for the DJ culture. Their first release in March 2012, Initio, is roughly translated to mean “in the beginning” which has truly developed into their mantra. “For DVBBS this is just the beginning. Initio has become our calling card.”

DVBBS’ inspired debut single, “DRVGS,” made waves and raves from the moment the single dropped in the spring. Since then DVBBS has had a momentous year packed with an explosion of live dates and North American festival performances supporting top artists and DJ’s such as Deadmau5, LMFAO, Calvin Harris, Rusko, Eric Prydz, Dada Life, Borgore, Adventure Club, Dragonette, Steve Aoki, Far East Movement, and Carnage.

DVBBS’ newest release, “We Know,” is a remarkable collaborative effort with Swanky Tunes and Eitro packed with powerful vocals and an escalating buildup followed by a much-anticipated beat drop that makes crowds wild.